"I Get the Feeling" - original song I wrote in the early 90's. Recorded but never released on CD.

"Flying High" and "Flying to Meet You" - two songs I composed for Delta Airlines, and played during the boarding and un-boarding of the flight.

Songs can be downloaded on the Big Coffee Records web site

"Mose Knows/168 Peachtree Circle" - original instrumental song of mine originally on the Mose Knows LP - and now as well on the Live at Richard's 1974 CD (released in 2010).

"Somethings Wrong" - I wrote this song for the Mose Jones Blackbird LP (RCA released in 1978).

"Alien" - Originally Mose Jones recorded this song for our 2nd RCA LP that was never released. The Atlanta Rhythm Sections recorded and released this song on their Quinella LP (1981) which became a top-40 hit song. In 2013 we did a successful KICKSTARTER campaign to release our old recordings - now Alien is available on the Mose Jones Lost/Found CD (released in 2013).

Some of these songs can be downloaded on the Big Coffee Records web site.

Listen and Download Our Music at Big Coffee Records 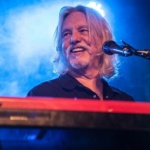 Currently playing live solo music every Wednesday 6:30-9:30 at Pampas Steakhouse in North Atlanta (John's Creek), and other gigs (check my calendar) - Working on production music for Big Coffee Music - and loving life and being married to my wife Marie!